You’re walking through Venice. It’s sweltering hot outside, as you can see from the sweat stains on everyone’s back (I’m talking at least 95 degrees plus humidity). And by everyone, I mean all the tourists, since Venice is crawling with them. You wander through the narrow alleys of the city, gawking at the notorious mask shops and resisting the urge to dip your feet in the murky, green canal water (the canals also serve as the sewage, you know).

A display outside a mask shop.

One of my favorites. 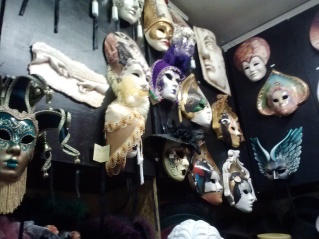 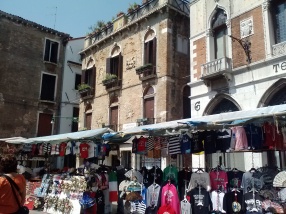 Outside vendors on the streets. 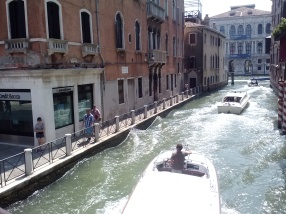 One of my first glimpses of the canals. 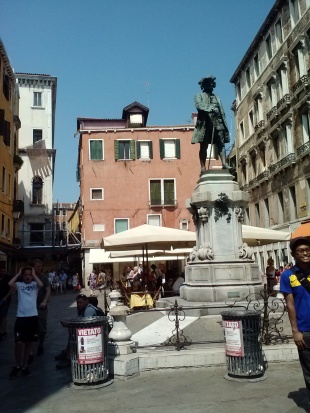 One of the piazzas in Venice. 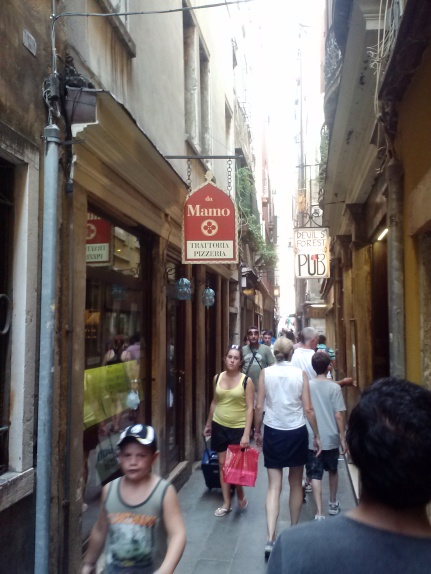 I can’t even tell you how many bridges there were.

Suddenly, an American girl in a sundress and sandals dashes past you, almost clipping your shoulder. She’s followed swiftly by two other Americans, and the trio seems to be heading towards the bus station. Clearly, they’re late for something.

Well, here it is: I’m the American girl in a sundress. The other two are my gracious hosts while in Venice, Joser and Brittany.

You see, when Joser checked his watch for the time, we realized that the bus station was about a twenty minute walk away. And at that point, we had ten minutes before the bus left. I asked if anyone was opposed to running, and when there were no complaints, off we went. Which brings us to this moment in time, in which we are sprinting through the city.

We arrive at the car with a little less than a minute to spare. Brittany throws the car into gear like a pro while I frantically grab my belongings that are strewn across the backseat and throw them into my purse. Two minutes later, we’re driving through the bus station. I think I see the bus parked in front, but with this particular station, we have to circle around the building before finding a place to stop. Joser offers to grab my backpack from the trunk so I can run to the bus. The car comes to a halt as I grab my purse and throw open the back door, and I bound through the station like a frantic American tourist who’s about to miss her bus. But when I get the the curb, the bus is nowhere in sight.

Joser appears a few seconds later with my backpack in tow. “Did you miss it?”

*Rewind to two days prior*

When I first arrive in Venice, Joser and I spend a few minutes coordinating a meeting place over the phone (“Do you see a yellow crane?” “Maybe… I’m next to this elevated train track that looks like it has teeth.” “Uh…what?”). Eventually, I find the yellow crane and, standing nearby, Joser. “Would you like me to carry your backpack?” he offers. “No thanks,” I decline, “it’s hiding the sweat stains.” He nods understandingly. It’s two in the afternoon and the sun is beating down on us relentlessly.

In spite of the temperature and the crowds, we meander along the streets of Venice for the next few hours.

A 24-hour clock with Roman numerals. I want it.

The entrance of the Basilica di San Marco. 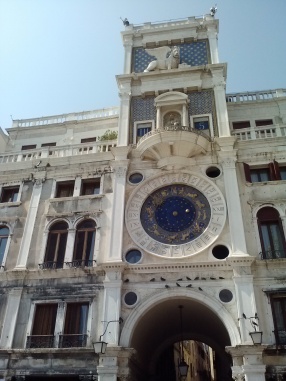 The clock on the Basilica di San Marco.

A side view of the Basilica di San Marco. 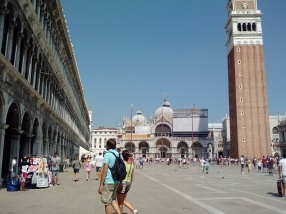 Another view of the Piazza di San Marco. 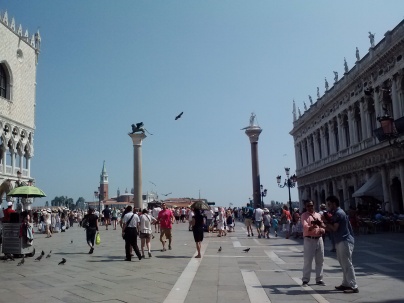 Looking towards the harbor in the Piazza di San Marco.

One of the harbors in Venice.

A preview of the architecture there.

Afterwards, we relocate his car and drive an hour to their home in Caneva, where Brittany is waiting for us. Brittany and Joser are actually my fiance’s friends from back home, and today is the first time I’m meeting either of them. We turn on a movie as the three of us chow down on the pizza and gelato that Joser and I picked up on our way back.

The next day, Joser whips up a scrumptious breakfast of potatoes and eggs while we discuss what to do. We decide to visit the Grotte di Pradis, a series of caves about an hour and a half away. Upon arrival, we manage to slip through the exit (totally an accident.. all of the “Do Not Enter” signs are in Italian), but we find that the staircase to the caves is guarded by the ticket man. We spend the next few hours scouting out the caves, including a cave that they sometimes hold Catholic Mass in. 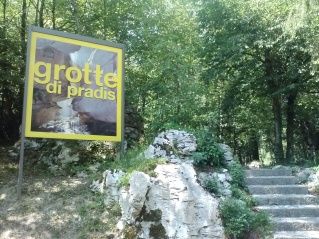 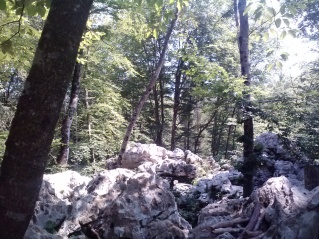 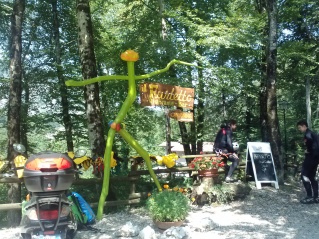 A sweet statue outside of the restaurant. 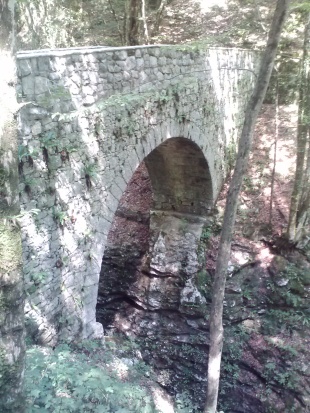 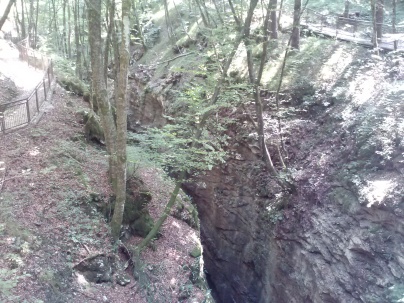 They actually hold mass in this cave. 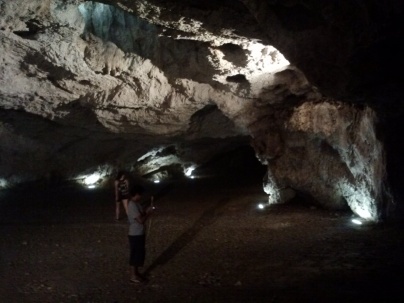 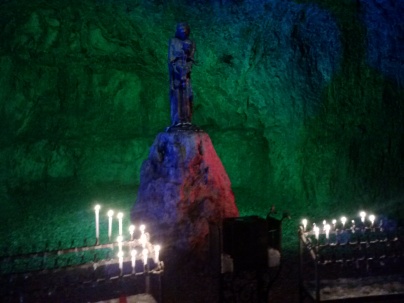 At the front of the cave. 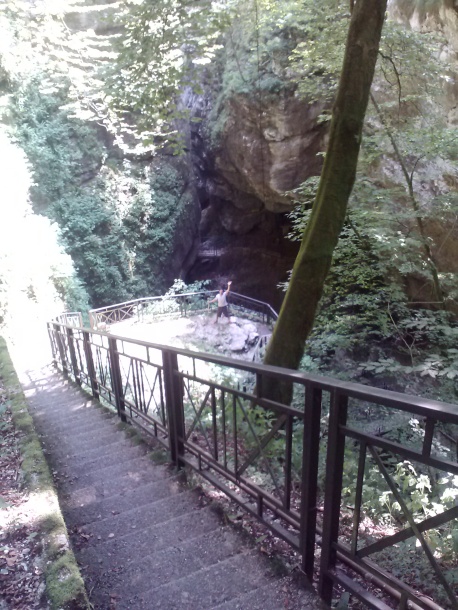 You can see how clear the water is at the bottom. 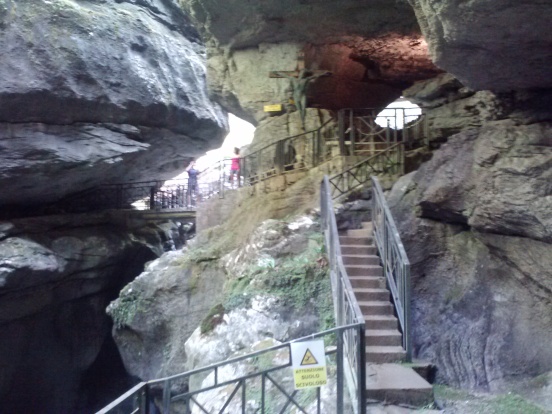 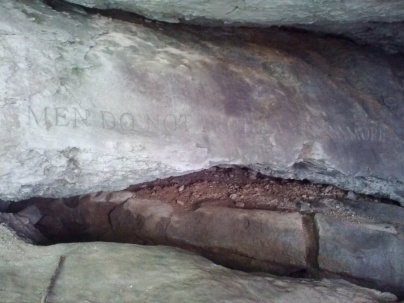 It says, “Men do not protect you anymore.” Nice sentiment, huh? 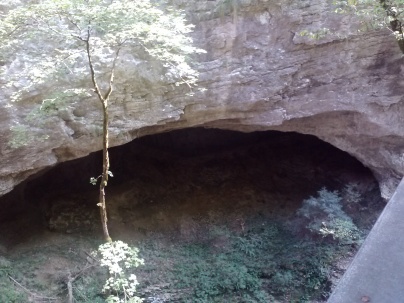 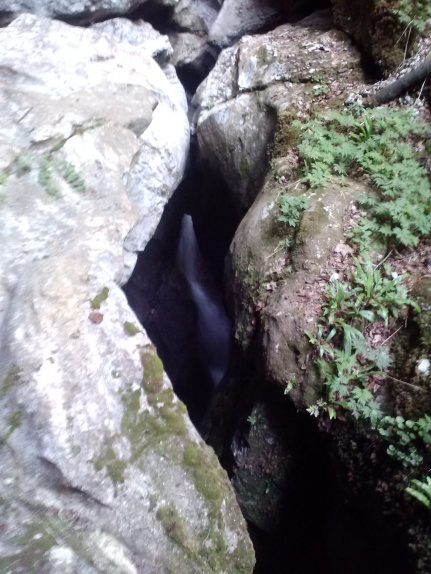 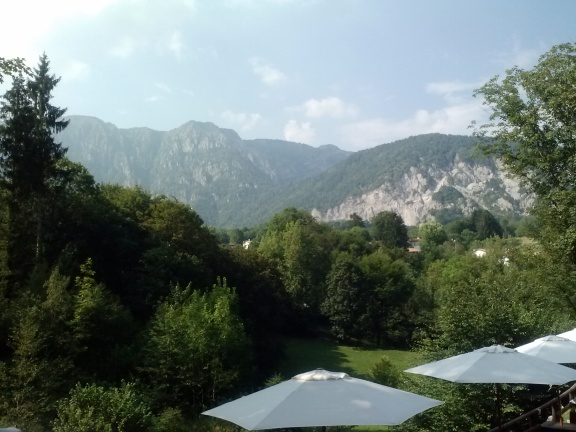 On the way home, we stop at a nearby church with a panoramic view. Then we spot a cool statue in the middle of a rotary (or round-about or whatever you call it), so naturally we park the car on the side of the road and take pictures of it.

The view from the road. We had to stop. 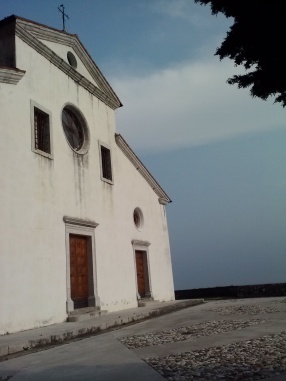 I want one of these.

Up close and personal.

Brittany turns to me, “So, how are you doing on energy?”

“We have another place to show you.”

It’s called “The Hole” at Gorgazzo. The pool of water is only a short walk from the road and has the bluest water I have ever seen in my life. The picture isn’t lying. But that’s not even the best part. Joser points to a sign nearby–the pool is actually an entrance to a cave that is at least 212 meters (695 feet) deep. I say “at least” because no one’s ever reached the bottom… they stopped letting cave divers go down after two divers died from running out of oxygen.

We finish the day with a stroll in the nearby woods. Joser and Brittany discovered this trail after they arrived here and wanted to share it with me. And now I’m sharing it with you.

Walking to “The Hole.” 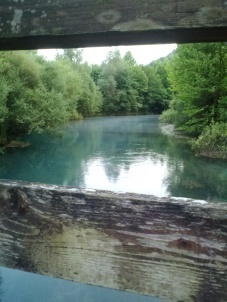 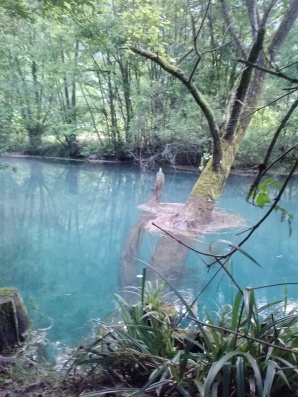 And yes, the water is actually that clear here, too. 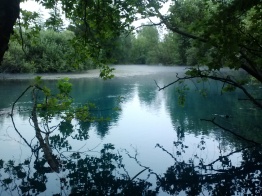 The mist on the river.

The next morning, the three of us decide to wander the alleys of Venice once more before I leave.

Which is when we wandered a little farther than we thought.

Which brings us to now, where I’m staring down an empty bus stop, convinced that if I stare harder, the bus will magically appear.

EPILOGUE (Warning: after this point, there are no pictures. But it’s a fun story anyway.)

After discussing the available options, we decide that I’ll stay the night with Joser and Brittany, and the following day, catch a train to Venice in time to get another bus going home. After buying all of those tickets, of course.

The train isn’t that complicated. “You can buy your ticket at the station. They take credit cards,” Brittany tells me.

The bus is slightly more so. The website won’t let me purchase a ticket online, but the lady on the phone reassures me that the Venice office has a credit card machine. (Here’s the thing about Italy: no one uses credit cards. Ever.)

The next day, Joser gets ready to drive me to the train station since Brittany is already at work. The train station is 15 minutes away, but just to be safe, we give ourselves 25 minutes to get there. Right on schedule, we lock up the house and amble out to the car. Suddenly, Joser stops mid-sentence, “Did I really just lock my keys in the house?” I stop fidgeting with the door handle and look up. He’s being serious.

A few minutes later, Joser is shimmying up a tree to climb onto the roof, since the second-story windows are open. A branch manages to go up his nose in the process (“My nose still hurts,” he tells me later). Nose injury or not, he stealthily climbs across the loose tiles on the roof and makes it to one of the bedroom windows. Soon we’re driving down the road with 15 minutes before the train leaves.

We get to the train station and I purchase a ticket as the train comes to a halt on the track. Excellent.

And for my next trick, purchasing a bus ticket. The only problem with that is that the station in Venice doesn’t have a credit card machine and the nearest one is in Bologna, 3 hours away. Awesome. The ticket man, however, is extremely obliging and talks to the bus driver about letting me buy my ticket when we stop in Bologna. The bus driver taps his watch impatiently as the ticket man talks to his contact in Bologna. My eyes shift uncomfortably to the floor as I wag my finger at myself in my mind. (“You are totally being that annoying American tourist who gives other American tourists a bad rep,” I scold myself.) Ten minutes and a phone call later, we strike an agreement and the bus driver lets me onto the bus.

Once in Bologna, I scurry to the agency where the ticket is waiting for me to purchase it. The wait is so long that the bus driver actually comes to check on me. Finally, it’s my turn. “Twenty-five euro,” the ticket man says as he takes my card. “But the ticket was supposed to be forty euro,” I tell him, determined to redeem myself to these people through my honesty. “Don’t worry about it. Twenty-five euro.” Well, if he insists. That night, I pull into the bus station and breathe a sigh of relief as I slide into the front seat of the car.